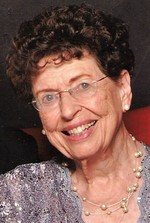 Family and friends will gather to celebrate her life at 2:00 PM Friday, February 28, 2020 at McNett Funeral Home Chapel in Andrews with Pastor Robert Pase officiating. Interment will follow in the Andrews Old Cemetery. The family will receive friends from 6-7 PM on Thursday at the funeral home. Please visit www.mcnettfuneralhome.com for obituary, visitation and service details.

Bernetta was born on October 1, 1930 in the small farming community of New Leipzig, North Dakota to Robert and Mary Kautz. She became a responsible person at a young age. Her father passed away when she was three, and her only brother, Harold, left home to join the Civilian Conservation Corps while she was still young, leaving only Bernetta and her mother at home. After graduating as valedictorian of her high school class, the school board invited her to teach in their one room country school. She accepted so that she could save money to attend college. In 1954, Bernetta met Fred Nelson while attending summer school at Dickinson State University. He had recently been discharged from the Army. While talking after class, they discovered they had both grown up in the same part of North Dakota. Fred gave Bernetta a ride back home one weekend, which led to their first date. After Fred cooked for Bernetta, she said, “I promised myself that if I ever met a man who could cook, I would ask him to marry me… So, will you marry me?” …to which Fred replied, “Never.” One year later they were married and went on to teach in the small town of Haynes, ND. While completing their Master’s Degrees at The University of Northern Colorado, a friend told them about the excellent school system in Andrews, TX. In 1957, after seeing it for themselves, they decided to make Andrews their home. Bernetta continued teaching for 40 years, 32 of which were at Glorietta Elementary School. She retired in 1991. After retiring, she enjoyed traveling to many countries and volunteering in Andrews. She devoted over 16,000 hours and 27 years to The Permian Regional Medical Center Auxiliary, “Pink Ladies,” where she served in all leadership positions. Bernetta also served the Gideon auxiliary, was a member of Texas Retired Teachers Association, and delivered Meals On Wheels to Andrews residents for many years. Bernetta enjoyed playing Bridge regularly with several of her friends, as well as various other card games with her family (she always won). Bernetta was a faithful member of Faith Lutheran Church in Andrews for over sixty years, where she served as church secretary and taught VBS.

Bernetta is survived by her loving husband of 62 years, Fred Nelson; her two children, Cheryl Bains (husband Bradley) of Midland and Dr. Paul Nelson of Austin; and grandchildren, Brensen Bains (wife Meg) and Ashley Bains of Midland. Throughout her years as a teacher and volunteer, Bernetta touched countless lives. Her warm heart, quick wit, sincerity and devotion will be missed.