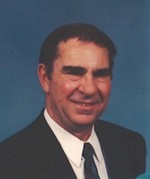 Joe Kenneth Weatherby, 88, of Andrews passed away on Monday, February 24, 2020 in Andrews.

Family and friends will gather to celebrate his life at 10:00 AM Thursday, February 27, 2020 in McNett Funeral Home Chapel with Pastor Brant O’Connor officiating. Interment will follow in the Andrews West Cemetery. The family will receive friends 6-8 PM Wednesday, February 26, 2020 at the funeral home. Please visit www.mcnettfuneralhome.com for obituary information, visitation and service details.

Joe Kenneth Weatherby, long-time Andrews resident, businessman, and civic leader passed away on Monday, February 24, 2020. Joe was born June 11, 1931 in Ector, Texas. He moved to Andrews in 1934 with his father, O.G. Weatherby, mother Vista Pritchett Weatherby, and two older brothers Woodard Pritchett Weatherby and James Robert Weatherby. His half-brother, Gordon Weatherby, often visited in the summers. Joe attended Andrews high school where he played football and ran track. He was especially proud of his 3rd place finish at the state meet in high hurdles. Joe graduated from Andrews High in 1949 as salutatorian and attended Texas Tech, graduating with a degree in Business Administration in 1954. He went on to serve in the US Army for two years, returning to Andrews in 1956 to join his father as a partner in the Weatherby and Son insurance agency. The agency, originally started by O.G., has continued today as the Weatherby-Eisenrich Agency, and is the longest continuing business in Andrews. Joe was very proud of the agency and loved his many work associates whom he considered like family. Joe met his future wife, an Andrews school teacher Carolyn Ann Francis, in 1956. They were married in 1958, and their son, Randy, was born in 1959. Joe was actively involved in the Andrews Chamber of Commerce and the Rotary Club for many years serving terms as president in both. He was a long-time member of First Baptist Church where he served as a mid-high Sunday School teacher. Joe was an establishing-member of the Mesquite Burners and the Chamber of Commerce Ambassadors. He enjoyed being involved in the Andrews Ex-Student Association. Some of his favorite activities were bird hunting, skiing, running, playing 42, and, of course, coffee-drinking. Some of Joe’s best memories were visiting over coffee at Cassidy’s and Jo’s Coffee Shop, and socializing with friends at the Senior Citizen’s Center and the Andrews Health Club. Over the years he and Carolyn enjoyed traveling with the Insurance Agents of Texas and other friends throughout Europe, China and tropical destinations. For many years they enjoyed working on their home in Ruidoso where they spent time in the mountains entertaining family and friends. Joe was preceded in death by his parents, brothers Gordon Weatherby, Woodward Weatherby, and James Weatherby.

Joe is survived by his wife of 61 years, Carolyn. He leaves behind his son, Joe Randall (Randy) Weatherby and his wife, Janet of Albuquerque, NM. Grandchildren Jeremy Weatherby and wife, Rebecca of Rio Rancho, NM and Amy Weatherby of Richardson, TX. He is also survived by his brother-in-law, Bill Francis of Clay City, IN, his sister-in-law Betty Weatherby of Wichita Fall, TX and nieces and nephews, Rodney Weatherby (Andrea) of Corinth, TX Jan Fleming (Chuck) of Wichita Falls, TX and Mark Weatherby (Ginger) of Wichita, KS, David Francis (Connie), Janell Grafe of Clay City, IN.

The family would like to thank all the workers of the Permian Regional Care Center for their care and support provided to Joe and his family.