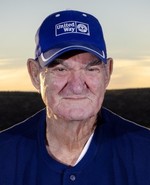 Leon Ellis, 79, of Carlsbad, New Mexico and formerly of Andrews, passed away on Monday, September 30, 2019 in Lubbock.

Family and friends will gather to celebrate his life at 2:00 PM Thursday, October 3, 2019 at McNett Funeral Home Chapel in Andrews. Interment will follow in the Andrews North Cemetery. The family will receive friends from 6 – 8 PM on Wednesday at the funeral home. Please visit www.mcnettfuneralhome.com for obituary information, visitation and service details, and family pictures.

Leon was born on July 16, 1940 in Checotah, Oklahoma to Henry Lee Ellis and Ruth Rebecca Truelove Ellis. He was raised in Oklahoma at Checotah and Broken Arrow and graduated from Union High School in Tulsa. He had lived and worked in Midland and moved to Andrews in 1964. He had married Ola Joyce Knight, and she preceded him in death in 1982. He had worked as a pulling unit operator and rig pusher for R & H Well Service, Chocks Well Service, Pride Well Service, and had worked for Saudi Aramco in Saudi Arabia and Libya. He had also owned and operated his own hot shot trucking company. He married Norma Faye Howell on October 5, 1985 in Andrews, and they moved to Coal Hill, Arkansas in 2004. They moved to Hobbs in 2010 and then to Carlsbad in 2016. He loved to fish, feed the birds and hummingbirds, hunt for and collect arrowheads, ride in the golf cart while his son, Rick, played golf, watch wrestling, Facebooking, and play Solitaire and Double Down Slots. He will be remembered as being a jokester, having a great sense of humor, was a great storyteller and loved to embellish them more overtime, had a great memory and could remember all the stories and times he spent with family and friends, and it was never quiet when he was around. Most of all, he loved spending time with his children, grandchildren, and great grandchildren. He was a Baptist and had coached his sons in Andrews at the Boys Club, while they were growing up. He was preceded in death by his parents, daughter, Tammy Ellis, brother, Hoyt Ellis, and two sisters, Cora Belle Mann and Will Nell Stacy.